Entrepreneurship Educator of the Year 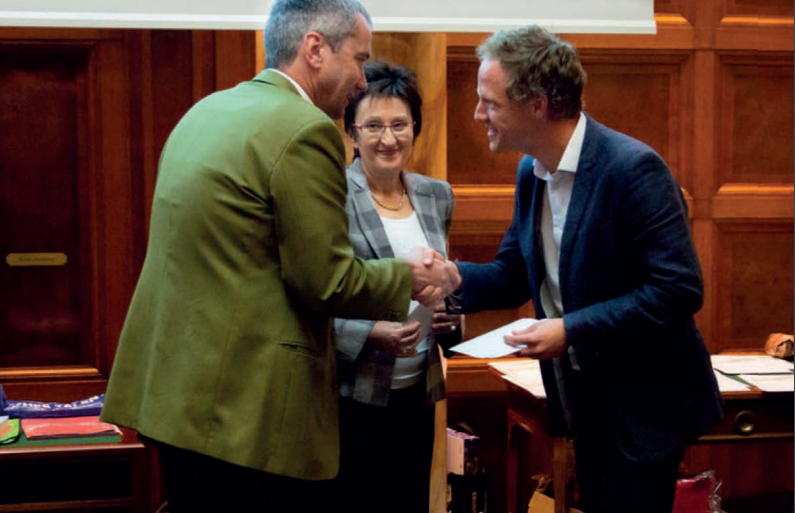 Entrepreneurship Educator of the Year

History of the initiative
The Initiative for Teaching Entrepreneurship (IFTE) is a network, which is mainly active in the sector of initial teacher education. It supports entrepreneurship education on the level of teacher training by organising events, workshops, seminars and summer schools. The programme and the people of IFTE are closely connected to e.e.si., which is the leading network for entrepreneurship education in Austria.
The idea for the Entrepreneurship Educator of the Year award was born out of the “Next Generation Competition”, a yearly competition for business ideas among pupils between 15 to 19 years. It was the idea to promote not only pupils, but also the teachers in the background. The initial idea came from Johannes Lindner and was then realised in co-ordination with the e.e.si. network and the Ministry of Education. In the meantime, further stakeholders could have been gained to serve as sponsors. Nominations for the award are given by e.e.si. co-ordinators, who are representing their federal states. The idea is that people from all nine federal states should have the potential of being nominated. The regional e.e.si. co-ordinators, who have been installed by the Ministry of Education, are responsible for co-ordinating the entrepreneurship education activities in their federal state (mainly at the secondary level in vocational education) and thus have a very good overview of what happens in their region.
The award is presented at two occasions, depending on availability of the winners, that is at the Festival of Ideas or at the Entrepreneurship Summit. Usually, the Minister of Education presents the award. The presentation by the Minister of Education emphasises its significance. The awards should raise awareness on the school level and beyond. Thus, regional and national media coverage is critical.
Main target groups for nominations are teachers at the primary and secondary level. Another group of stakeholders in the Entrepreneurship Educator of the Year award are those who are engaged in entrepreneurship education, such as business coaches.

Activities
Teachers are key multipliers, if it is to strengthen the initiative and entrepreneurial spirit of children and young people in the school environment. Since there are already a number of initiatives, competitions and awards for pupils, teachers should be appreciated as well. Thus, the award honours their commitment and at the same time presents their ideas and projects to the public. The areas in which the awarded persons are active are as follows:
• Learning occasions: The first areas are learning activities and learning processes with children and young people. Here there might be “fix-starters”; teachers whose classes and pupils achieve a gold medal at the Next Generation Competition or at Euro-Skills, a competition in vocational education involving an entrepreneurship-category, and automatically receive the award in recognition of their mentoring.
• Organisational work: Doing organisational work at the school level and developing a school concept in the area of entrepreneurship. Here it is not enough that one promotes the already existing e.e.si. school concept, but that one creates innovative priorities. For example, one school received an award for organising a one-day-per-week free time, in which pupils can choose specific areas of learning in order to further develop certain strengths and potentials. For this purpose, the normal regular lessons were shortened by 5 minutes, which created an additional day per week. Besides, stakeholders could also become recognised in this area, if they develop innovative offerings which have been integrated into the school system or organise festivals.
• Teachers as multipliers: The third area is teacher training and continuing development, in which teachers are inspired and innovative offerings are set. Also included here are the committed and engaged activities of stakeholders.
Most of the awarded activities are in secondary education because entrepreneurship education has systematically been implemented there from the beginning. Meanwhile, there are also a number of awards in primary education, mostly running under categories like “self-efficacy” or “empowering every child” and following the tradition of emancipatory entrepreneurship education approaches. There are also extracurricular activities, such as an evaluation approach in which models of self-assessment and peer-assessment were developed for the evaluation of key competencies of lifelong learning, including entrepreneurship competences. This was done by a group of teachers on their own initiative, without being linked to any teaching subject.
The award is mainly a symbolic certification and it includes no money. Winners normally receive a voucher for a breakfast for two, which symbolically should stress the significance of close relationships, partnerships or friendships, who often suffer from the intense workload of the awarded persons in terms of less quality time together.

Breaking barriers for impact
In terms of challenges, they are related two main themes, awareness and attention. One challenge lies in the overarching awareness of the topic, which should be sharpened by the award. In Austria, not all federal states are committed to the same extent to entrepreneurship education, some are still relatively “far away”. Entrepreneurship education can be promoted, among others, by school boards (in Austria “education directorates”). In Vienna, for example, there is currently an education director who has taught entrepreneurship himself and thus promotes the topic. The other challenge is media attention. It would be beneficial if teachers, pupils, parents, principals and other stakeholders could read about the award or other entrepreneurship education-activities in the newspaper, but unfortunately there are reservations on the part of most media representatives for competitions and festivals from the education sector. “I know some editors-in-chief really well,” says Lindner, “and when I say to them, ‘Well, wouldn’t that be a nice story for you?’ they say, ‘Education issues are politics – and we only do critical reporting here. Anything that is positive reporting in that area is paid for. And if you can pay for it, I will be happy to put you in touch with the marketing department, and then we will do it.’” So, education has a tough standing in that regard and gets less media attention thanother topics such as sports, also receive “positive coverage”.
In overcoming challenges, next to school boards which can promote the award, an important supporting factor is the directors at the school. They are usually present at the ceremony and thus show the awarded teachers their support. In addition, most of them proudly communicate the award to the outside world, for example in the directors’ association. Furthermore, more ambivalent than in the case of the directors might be the situation when it comes to the colleges of the awarded teachers. There is sometimes a peculiar form of jealousy among teachers. “At some schools not at all, but at others very much so,” says Lindner. “I can imagine that some teachers do not want to make a big deal about it at their own school, because they are afraid that they won’t get good feedback.” At other sites, however, the whole school throws a party. One can only wish that something like this happens more often in the spirit of celebration culture. After all, Lindner says, among teachers in particular, the celebration culture “certainly still has room for improvement.”
In terms of immediate impacts, schools whose teachers win an award can consider it as an important confirmation of their activities and orientation. Another rather general impact is the image of teachers. Positive examples of activities and personalities are opposed to the conventional stereotypes and thus can positively change the public teacher image. Nevertheless, the award remains the easiest to communicate to the target group of teachers and is well known – “at least among those teachers who are open to the field of entrepreneurship.”
Among the awards that have made a particularly lasting impression, Lindner cites two examples: One is a teacher who, when presented the award, openly admitted how sceptical she was in the very beginning, and thus said: “Well, when it started at our school with entrepreneurship, I didn’t know what to do with it at all. I just thought, another new thing, and anyway, do we really need this?” But over time she saw how the pupils grew and suddenly teaching became much easier.
Another example, a teacher who had made it clear from the beginning that she was “unionised through and through”, but gradually learned how in the entrepreneurship education, both sides, employer and employee, “go together” really well. What is more, for this particular teacher, it was four years before her retirement and thus it was a real push that allowed her to experience something new and exciting.
According to Lindner, the award is a symbol for the need of more celebration culture in education, especially among teachers. The role model for this can be sports, where it is always honoured when someone works continuously on something and then achieves success. Even if this should fail to materialise. Since this is about appreciation and recognition, the development of our personality depends on it. Moreover, it also has something to do with a locomotive function, because the next generation of pupils (and teachers) may then say, “Well, what they can do, we can do too!”